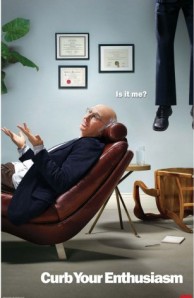 At the outset of this post, I am throwing my hands in the air, and begging those fans of HBO’s Curb Your Enthusiasm to keep an open mind. I know you’re a passionate bunch, but remember … I’m not insulting you personally. Everything I say is just an opinion, it’s all in good fun, and is punctuated with smiley emoticons (metaphorically).

I, myself, am definitely not a fan … to my husband’s utter bafflement. Over the years, he’s tried to get me to fall in love with Curb as he has. But no matter how many episodes he guilts me into watching (“Just one more, please! I know you’ll love this one. It’s right up your alley, I swear it!) I find the show downright unpalatable.

For the longest time, though, I was unable to articulate why that was. All I knew was that I didn’t laugh, I didn’t care, I didn’t want to watch. Then, in one of my more analytical moments, I sat down and really thought about it. What was it about Curb that I simply couldn’t stand? What I discovered was this: the thing I don’t like about the show is the same thing I don’t like about a lot of poorly-written fiction …

Curb Your Enthusiasm is far too contrived.

There, I said it. Go ahead, Curb fans, throw your digital vegetables at me and boo at your computer screens till you’re blue in the face! [Insert smiley face emoticon here]

Okay, so Larry David is a quirky character, I get that. That is where his comedic genius lies: in being the odd man out, the one who reacts to situations in a way that no normal person does. It’s the formula that most successful contemporary sitcoms follow (Friends, The Big Bang Theory, The Simpsons, etc.). What I don’t like about Curb is that everyone Larry interacts with behaves the same way he does. It’s like a world full of Larry Davids, and it’s what each episode relies on to get Larry into these situations where he can start behaving so Larry-like.

Take, for example, “The Massage” (episode 10 of season 2) where Larry is arrested for stealing forks from a restaurant. In one scenario, he packs up his half-eaten meal and brings it out of the restaurant for his waiting driver to eat. The driver looks into the bag, sees that the food is Larry’s leftovers, and with a look of disgust says, “I can’t eat this. This is your leftovers” (or something to that effect).

As ridiculous as that was for Larry to do, I ask you this? And answer truthfully … What is the likelihood that an employee – a real employee in the real world – would respond in that way to his or her employer? Far more likely that he or she would simply nod, smile, give a begrudging thank you, and then go home and verbally blast the employer to friends and family. Larry’s decision to bring his table scraps to his driver was a funny moment; it was good comedy. His driver’s reaction, and then Larry’s counter-reaction and then the driver’s counter-counter-reaction … it’s just too over-the-top and – get ready for it – contrived.

In the next scenario of that episode, the maitre’d of the restaurant is angry with Larry for a previous incident. When Larry tries to take a fork out of the restaurant to give to his driver, even though he explains why he’s taking the fork, the maitre d’ has Larry arrested for stealing. Again, in what world would that happen? In what world would a maitre d’, faced with that situation, go to such drastic measures and still hope to keep his job? But, it was the plot point that was needed to have Larry react in a Larry-like way, and sends him to court where he gets himself into yet another scrape.

The comedic genius of having a character like Larry David in Curb Your Enthusiasm lies in this character being the quirky personality. Michael Scott from the US version of The Office is also a quirky personality … not quite in the same way, but the principle stands. And when he does things that are so very Michael-like, what makes it funny is that those surrounding him react in believable ways. We don’t have a show full of Michaels, The Office wouldn’t be funny if we did. (Some would argue that The Office is full of quirky characters, so to nip that conversation in the bud, I’d point out that when each character lets his or her quirky out, the rest of the office, including Michael Scott himself, behaves as we would expect a person to behave.)

So, I encourage you to apply what I’ve said about Curb Your Enthusiasm to your fiction writing. As authors, we hear often that we should not write contrived or convenient plot devices to move our characters from A to B. If your character is not behaving in a way that is not organic to who she or he is, then your plot will seem forced. Or, if your supporting cast is not behaving in a way that we would expect average human beings to behave in similar circumstances, then your plot will seem forced. Just as the comedy in Curb Your Enthusiasm is forced. IMO … I repeat, Curb lovers, I-M-O!

If you want to write a well-plotted, well-drawn story, make sure you spend time developing your plot points. Avoid convenient plot devices.

Alright, I’ve given my two cents … have at me Curb fans, I’m ready for it!